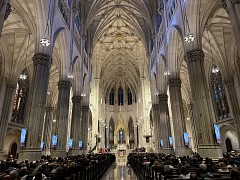 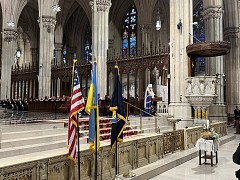 The walls of the 19th century St. Patrick Cathedral in New York, NY were filled with several thousands of people and solemn chanting of a Memorial service, honoring the memory of about 10 million people, the victims of the artificially created Genocide-Famine in Ukraine of 1932-1933.

Following the requiem service, representatives from the United States government and the Diplomatic Corps of Ukraine were offered an opportunity to deliver remarks.  Among the speakers were Metropolitan Boryz Gudziak of the Ukrainian Catholic Archeparchy of Philadelphia, Metropolitan Antony of the Ukrainian Orthodox Church of the USA, US Senator Chuck Schumer (D-NY), Mr. Andrew Weinstein – Representative of the United States, General Assembly of the United Nations, Mr. Sergíy Kyslytsya - Ambassador Extraordinary and Plenipotentiary of Ukraine to the United Nations and Mr. Michael Sawkiw, Vice President of The Ukrainian Congress Committee of America (UCCA) and Director of the Ukrainian National Information Service (UNIS).

The Dumka Choir, under the direction of maestro Vasyl Hrechynsky chanted solemn responses to a Memorial Panakhyda for the Famine victims.

The Genocide of 1932-1933 is one of the darkest pages in the history of the Ukrainian nation.  Up to 10 million innocent victims were starved to death through a deliberate Soviet policy aimed at crushing the nationally conscious Ukrainian peasantry.  The Ukrainian Genocide ranks among the worst cases of man’s inhumanity towards man and is perhaps the most extreme example of the use of food as a weapon.

Latest News
00000
Akathist to the Birth-Giver of God - the Healer of Cancer and Other Illnesses
00001
February 12, 2023 - UOL Souper Bowl Sunday
00002
The First Issue of 2023 UKRAINIAN ORTHODOX WORD Posted Online
00003
Blessed Name's Day and Happy Birthday to Metropolitan Antony
00004
Stavropygia of the Ecumenical Patriarchate in Ukraine in cooperation with the UOC of the USA presented the first in recent history Gospel-aprakos in the Ukrainian language
00005
Metropolitan ANTONY Marks the 10th Anniversary of Enthronement as the Metropolitan of the Ukrainian Orthodox Church of the USA
00006
Axios! Metropolitan Antony Celebrates 10th Anniversary of his Enthronement as Metropolitan of the UOC of the USA
Pastoral Reflections
00000
Неділя про Закхея
00001
«Покайтеся, бо наблизилось Царство Небесне»
00002
Theophany
00003
Іван Хреститель - Голос Вопіющого в Пустині
00004
David the King, Joseph the Betrothed and James, the Brother of the Lord
Upcoming
00000
Archbishop Daniel's Liturgical Schedule
00001
02/02/23 - ASC Capital Improvement Project Kickoff Meeting
00002
Month of FEBRUARY in the Life of the Church - Місяць ЛЮТИЙ в житті Церкви
00003
Weekly Journey to Pascha - Подорож до Пасхи
Recent Galleries