We venerate Your most pure image, O Good One,
and ask forgiveness of our transgressions, O Christ God.
Of Your own will You were pleased to ascend the Cross in the flesh
to deliver Your creatures from bondage to the enemy.
Therefore with thanksgiving we cry aloud to You:
You have filled all with joy, O our Savior,
by coming to save the world.

No one could describe the Word of the Father;
but when He took flesh from you, O Theotokos, He accepted to be described,
and restored the fallen image to its former beauty.
We confess and proclaim our salvation in word and images.

We have begun the Great Fast in preparation for the journey to Holy Pascha by asking everyone for forgiveness. We have prepared by eliminating meat and meat products, then eggs, milk, and other dairy products…and so it begins.

The Church gives us help along the pathway of preparation—services of Saint Andrew of Crete, Akathists to the Most Holy Theotokos, Memorial Saturdays, and Presanctified Liturgies are all tools to sustain us as we travel the road to Resurrection Sunday.

Each of the Sundays of Great Lent is dedicated to a particular remembrance—Saint Gregory Palamas, Saint Mary of Egypt, Saint John Climacus, and the Veneration of the Most Holy Cross—are set aside to teach us about those who lived saintly lives and the Cross refreshes us at the mid-point of the fast.
The First Sunday, however, recalls an event that changed the history of the Christian Church forever. The restoration of icons to the churches of the empire is commemorated as the victory of the True Believers over the Iconoclasts—the haters of icons, who taught that they were graven images and against the commandment of God.

Years of conflict in interpretation of the images as “windows to Heaven” or “gateways to Hell” resulted in deaths, deposition of clergy and hierarchs, and oppression by the disagreeing factions. Those living under the influence of Islam encouraged the condemnation of images—using arguments prevalent in their lands.

The Byzantine Emperors were not above the fight…in fact, Leo III the Isaurian issued an empire-wide ban of all icons of Jesus, the Theotokos, and all the saints in 730.

Saint John of Damascus led the fight to continue the use of icons as teaching tools, especially among the illiterate masses, and encouraged their use. His teaching centered around his clarification and distinction of the terms worship and veneration, teaching that we worship God, depicted in the icon, and simply venerate the icon itself as an image of the Prototype. In his defense of icons he wrote, "I do not worship creation over the creator."

Leo’s sons Constantine V and Leo IV continued his position and enforced the ban until the latter died—and Empress Irene ascended the throne in Constantinople. Tiring of the battle of Christian versus Christian, she decided that it was time to end this bickering. The Second Council of Nicea [Seventh Ecumenical Council] gathered in 787 at her behest to evaluate both sides of the argument and to ask the Holy Spirit for guidance. The decision was to ban WORSHIP of the icons—that is the actual image, but to affirm VENERATION of the images—worship of Christ, Mary, and the saints using the icons as a tool—a window—to the actual person. They concluded that God Himself had given us His Beloved Son in the flesh as the first true Icon for veneration.
The majority of Christians supported this decision, although there were other outbreaks of iconoclasm in the years to come, which were never as strong as the movement under Leo III.

To this day, icons continue to be a sign of God’s Love for His children, and Orthodox families have icons in their homes, offices, and even cars! Some houses dedicate a corner of one room to prayer, complete with icons, lamps/candles, incense, and prayer books, gathering to pray together as a Christian home church!

The restoration of the icons into the churches in Constantinople is remembered to this day by the procession of clergy and laity on the first weekend of Great Lent. Some churches celebrate the Rite of Orthodoxy in conjunction with the Vespers of Saturday evening, while others gather on the afternoon of Sunday itself and close the day with the Rite.

In the majority of the services, they omit the reading of the Anathemas, especially if there is no presiding hierarch.

Orthodox Clergy Associations, who set a central location for the service and may invite a hierarch, theologian, or monastic to address all those who gather, sponsor many local celebrations. A procession with icons normally ends the service, at times followed by the prayer of Saint Ephraim, “O Lord and Master of my life…”

As we continue the Great Fast, we should remind ourselves of the sacrifices of our ancestors to preserve the Holy Orthodox Faith. We too often take our religious freedoms lightly, and assume that all will be as it is now for future generations. As we look at those images of Our Savior, His Blessed Mother, and all of His Saints, we should remember that they lived their lives at times of great risk for Believers.

Let us pray for all those who gave their lives to preserve the True Faith, and those who continue the fight today.

May God keep you safe as we continue this year’s journey toward Golgotha, ever mindful that the culmination of the path is the empty tomb and the exclamation, “Christ IS Risen!”

Latest News
00000
Ukrainian Orthodox Word - June Issue
00001
XXIII Regular SOBOR of the UOC of the USA - Registration Available NOW
00002
The UOC of the USA Donated Washing Machines for the Refugees in Ukraine
00003
Thanks to the efforts of the UOC of the USA, the Ukrainian Children’s Summer Camp “Barvinok” has opened!
00004
57th Annual UOL Convention - Have Your Registered?
00005
2022 UOC of the USA Camping Ministry - Registration Open!
00006
Statement of the Assembly of Canonical Orthodox Bishops on the Sacredness of Human Life And Its Untimely Termination
Pastoral Reflections
00000
All Saints of Ukraine
00001
Вірою царства вони перемагали
00002
All Saints Sunday
00003
Vacation from God?
00004
День Святої Тройці. П’ятидесятниця.
00005
The Feast of Pentecost
00006
The Ascension of our Lord
Upcoming
00000
Archbishop Daniel's Liturgical Schedule
00001
16 July at 9:30AM - All Saints Camp Annual ONLINE Meeting
00002
Month of JULY in the Life of the Church - Місяць ЛИПЕНЬ в житті Церкви
00003
Prayerfully Honoring the LIVES of the Innocent Victims of the War in Ukraine
00004
UOC of the USA: Our Humanitarian Mission in Ukraine
Recent Galleries 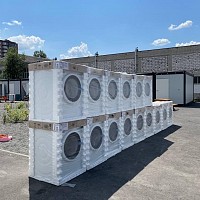 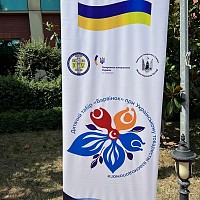